History of the ATA

The ATA was founded in November 1949, by 17-year-old Jerome (Jerry) Husak in Milwaukee, Wis. His idea, to recruit a group of people who would like to share topical collecting ideas, got a lukewarm reception from his parents, who were more concerned with his schoolwork. However, they supported his plan, and Jerry’s bedroom became the ATA office. The first issue of Topical Time came out late that year. Initially dues were one dollar per year.

Within five months ATA had over 400 members, and membership continued to grow.

Jerry managed to find time for academics and ATA all through college, and he became the first executive secretary. After college he opened an office and it was there he met Sally Vogel, who became his wife in 1956. She was his partner in running the ATA office.

ATA held its first national convention and exhibition, called TOPEX, in Johnstown, PA in 1952. A national event has been held most years since then, often in collaboration with other groups. In 2000 the show became independent and the name National Topical Stamp Show was adopted under the leadership of show chairman David Kent. Since 2018, the NTSS has been a joint show with the APS. In 2020 it was to become a joint show of the ATA, American Philatelic Society and American First Day Cover Society, called Great American Stamp Show. Unfortunately, the show had to be cancelled due to the Covid-19 pandemic. A list of past show dates and locations is available by clicking here.

The first affiliated study unit, the Casey Jones Railroad Unit, was founded in 1950, and many others soon followed. Study units have been added and dropped through ATA’s 70-year history, as interests change. Chapters (stamp clubs throughout the country) were authorized in 1951. The first to sign on was the Thematic Stamp Club of South Africa. Chapters have topical programs and promote ATA projects.

In more than 70 years, ATA has had only seven executive directors (formerly called executive secretary). They have been a dedicated group who managed the many aspects of running the association. The present executive director is Jennifer Miller.

Topical Time, our award-winning journal, has also had just seven editors. Noted philatelist, author and editor, Wayne Youngblood, has edited the journal since 2009.

ATA has had 20 presidents since it was founded, and thousands of volunteers have taken on projects big and small in those years. It is impossible to name them, but they should feel a good deal of pride in what they have accomplished. 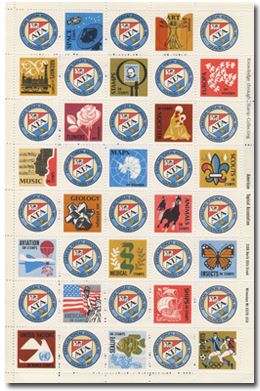 Fifty-nine popular topical subjects, each adapted from actual stamp designs of 20 countries, appeared in vivid multi-color on sheets of philatelic seals (shown here) produced by the American Topical Association in the mid-1970s.